Is Fish Oil Supplementation for You? I’ve said I would never write for a supplement company. Supplements are a first world privilege. It is a privilege to be able to buy them and to seek to understand their use. Supplements are exactly that… Supplements. They cannot and must not be stacked on diet of Honey Buns and Taco Johns. There is no pill to replace sleep or find your life’s purpose. I am far from enamored with the industry as its consistent cherry picking of studies and paying for physician continuing education reminiscent of the pharmaceutical industry, except with self-enforced regulation. Thus, why would I write this article on Fish Oil for Civic Nutrition?

Because I am not writing it for a Supplement Company. I am writing it for Henry Lau and I believe in this man. Period. I believe in his tenacity and relentless drive to do the right thing and problem solves at a level that most people will just not go.

He understands that Fish Oil isn’t the answer to everything that ails us. He also understands that it is probably not even that big of a piece to the puzzle. But, he also realizes that Fish Oil is probably the easiest and cost effective means to flip a new age human’s Omega 6 to Omega 3 ratio back into what is more evolutionarily desirable. Thus, he felt a responsibility to take a Henry type dive into the issue and as he has come to the surface, he has brought with him one of the purest, potent, absorbable, and sustainable re-esterified triglyceride based Fish Oil products on the market.

Why is this important? Because by 2050 there may be no more life in the Ocean.

This issue is far bigger than human health or nerdy ratios. Yet, the little actions we take…matter. So if you buy Civic Nutrition’s Fish Oil, which is what it says it is, as well as pure and sustainable you have made a choice to not only choose your own health, but the health of the planet.

With that, let’s take a deep dive into Omega 3 Fatty Acids.

You can easily look this up on Wikipedia, thus I am not going to bore you with the organic chemistry details of fatty acid composition. Omega 3 fatty acids are polyunsaturated fats with the first double bond 3 carbons in from the methyl end of the molecule. Borrrrring.

Omega 3 conversion looks like this (Editor's note: with Omega-6 conversion by its side) 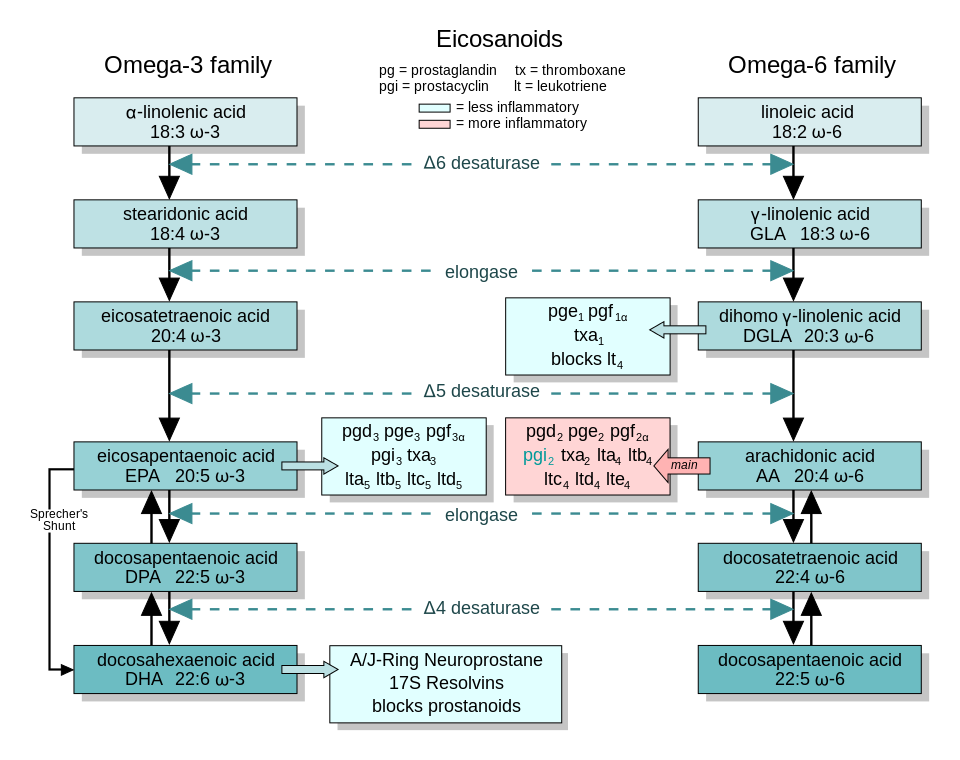 What is that hieroglyphic nerd scribble you ask? Well, basically there are shorter and longer chain Omega 3 fatty acids and all of this nomenclature has to do with the number of carbons laced together and the position of the double bonds.

Let me say that again, humans cannot make Omega 3 or Omega 6 fatty acids, thus we have to get them from our diet. Omega 6 fatty acids tend to be more inflammatory, whereas Omega 3 fatty acids tend to be more anti-inflammatory, all of this has to do with eicosanoid production, changes in lipid membrane composition, and gene transcription, which we will absolutely not get into here [1]. Nevertheless, the Omega 6 to Omega 3 ratio of current western diets is estimated to be around 17:1, the opposite of our ancestral diets which has been estimated to reside somewhere around 2:1 or even 1:1. Furthermore, decreasing this ratio in favor of Omega 3s has been found to reduce inflammation, which makes sense given what you learned earlier in the paragraph [2].

All that said, humans are just flat out horrible at converting the short bus Omega 3, α-Linolenic Acid into the longer chain Omega 3s, the major ones being EPA (Eicosapentaenoic Acid) and DHA (Docosahexaenoic Acid) predominantly found in the fat of cold water fish (which enters the food supply via phytoplankton). Arguably, these longer chain Omega 3s are where the real money is in terms of body composition, performance and health benefits. Yet, common sources of α-Linolenic Acid include: walnuts, flaxseeds, chia seeds, and vegetable oils.

“The proportion of α linolenic acid entering the desaturation/elongation pathway and converted to EPA is low, possibly in the order of 8%. The extent of conversion of αLNA to DHA is less clear. The highest estimated fractional conversion is 4%, while most other studies have reported lower estimates of conversion (less than 0.05%).”

I am not saying walnuts and flaxseeds are not “healthy”. The research on nuts and seeds are overwhelmingly positive at the population level [4]. But, let us not forget that they are very dense calorically and I have seen more than my fair share of Paleoers blowing out their caloric threshold by dry heaving handfuls of trail mix. What I am saying is that you are probably not going to get a significant pop in your EPA and DHA status by gurgling a pint of chia seeds or walnuts.

Whereas α linolenic acid is found in plant foods, significant amounts of EPA and DHA are only found in animal foods (that are eating sources of Omega 3s, and thus bioaccumulating them in their fat tissue). Cough, unsupplemented Vegetarians have a very low in DHA status (critical for brain development) [5] and in Italy, the government has even proposed making vegetarianism illegal for pregnant women and children.

Consequently, our dosing strategy will be pretty similar for EPA and DHA in the form of fish oil – 3 to 5 grams a day. It is worth noting that fish does have more to offer than just a tremendous Omega 6 to Omega 3 ratio, it is also a highly bioavailable source of protein and contains fat soluble vitamins, selenium, as well as other minerals. It may also be a source of heavy metal contamination, but this subject is still hotly debated due to the ability of selenium to counteract the effects of mercury and is far beyond the scope of this article.

Well, if you are reading this we can assume that you are (hopefully) eating a primarily whole foods based diet, so let’s play this out from a very paleo angle for a 180 pound active male human who would probably need around 3,000 kcal (may actually need to be a bit higher depending on activity levels). We will make this diet high in protein and moderate in terms of carbohydrate and fat. This will make as many of the readers as possible, as happy as we could get them.

Let’s make some magic happen at 2.5 grams of protein per kg body weight (I know this is high but dude-bros tend to eat this much protein anyways), 4 grams of carbohydrate per kg, and 1.5ish grams of fat per kg. I don’t think anyone is going to heavily contest these macros, if anything it is a little heavy on the fat depending on his goals and how he is actually training.

15 oz of Lean Protein (I am not going to get into the nose to tail argument here, I agree with it, but most humans will not eat organ meats…I live in the real world so let’s stay there.)
1 Scoop of Collagen Protein

And at least 3lbs of Vegetables

Most people looking at this would think…well that looks quite nice and I agree.

BUT, still this total food intake would have an Omega 6 to Omega 3 ratio of around 12:1 (this would change if you went to a higher saturated fat content, but the overall Omega 3 intake would not change significantly)

If we added 5 oz of salmon and took away 1 TBS of Olive Oil to the total food above, we would get down to around 2.75:1 ratio. But, that would mean this human would have to eat salmon every day, which is a large financial burden, and…well they also have to like eating cold water fish.

Now if we have this human go back to the original diet and take 1 TBS of fish oil they will get down to a ratio of 2.5:1 AND if roll up to the dosage recommended for fat loss by the International Society of Sport Nutrition (ISSN) of about 4 grams of EPA and DHA combined we get to a ratio of about 2:1 [6].

Why Omega-3s are important to health?

This whole idea that Omega 3s are important got started in the 1960s when researchers found that populations that ate a lot of cold water fish had less cardiovascular disease risk. This is called epidemiologic research and it is lowest on the evidence totem pole. I will not belabor this fact, but if you want to understand the flaws in assuming casualty in this realm look no further than the Ancel Keys hypothesis. Google it.

In the following decades, in randomized controlled trials, EPA and DHA have been found to lower inflammation and triglyceride levels with variable effects on plasma lipids [7]. Recent meta-analyses looking at fish oil and the potential impact on major cardiovascular events have found no association [8]. Yet, these findings are hotly contested and many believe that this was due to an insufficient dosage and/or not testing Omega 3 status at inclusion. There are an insane amount of subjects currently enrolled in Omega 3 research trials, so we should know much more in the very near future.

But, let us not throw the baby out with the bathwater as lowering inflammation is probably a great idea in most humans and there are other benefits of consuming fish oil that you may not know about – like fat loss and increasing insulin sensitivity of muscle cells [7, 9]. Additionally, Omega 3 Fatty acids have been found to reduce cortisol [9] and increase muscle protein synthesis through the elevated activation of mTOR (whether this acute finding translates to adaptive changes in muscle mass long-term is currently unknown) [10].

There are a plethora of potential positives to taking fish oil and very few and unlikely applicable negatives (reduction in blood clotting and possible GI distress). Thus, the risk/benefit ratio for fish oil supplementation on the health side is through the roof, and the greatest risk may actually be the damage that our consumption of Omega 3 Fatty acids may do to the environment.

Civic Nutrition’s fish oil has the EPA and DHA content you are looking for. It is potent, pure, and is what it says it is, and most of all Henry has done all the groundwork for you so you know that it is one of the most sustainable Fish Oil products on the market.